In 2013 VICTOR presents the three-type racket concept, making the characteristics of rackets more distinctive, allowing players to more easily find the racket that best suits them. VICTOR has also brought out the first of the Thruster, a new attack-type racket series, the TK-8000 (see figure 1). The TK-8000 not only boldly features an all-new design concept it also has the new material, grapheme, at the 3 & 9 o'clock on the frame, the aim being to bring out the “strong and durable” characteristics of a fine attacking racket to the full. 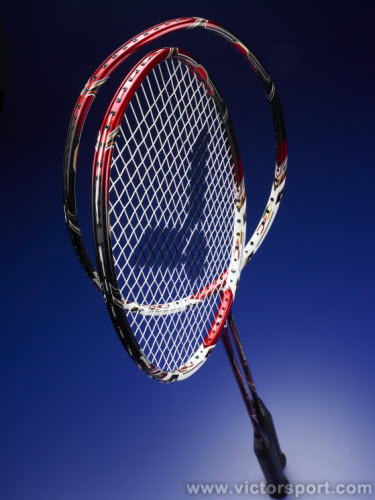 Badminton racket  TK-8000
The TK-8000 will become the racket of choice of many top players in 2013; for this reason, as early as one year ago the VICTOR team began letting players suited to the racket test it, including South Korea’s Ko Kung-hyun and Bae Youn Joo, Chinese Taipei’s Tsai Chia Hsin, Chen Hung-lin, Lin You-lang, Hsu Ya-ching, and others. During each test the movements of the player were recorded using a high speed camera (Fig.2) then image analysis was carried out; after testing, one-on- one discussions were carried out with the players and the racket parameter settings were then adjusted in line with each player’s feedback; the racket was re-made and then verification testing carried out (Fig. 3) to ensure that the racket was perfect. 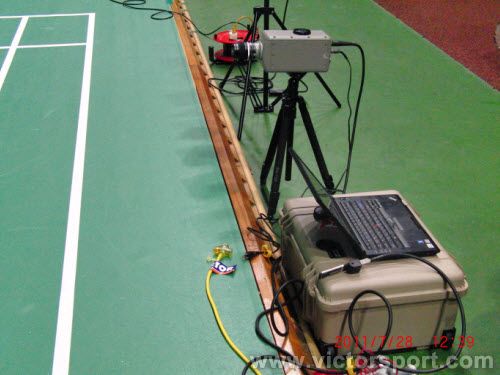 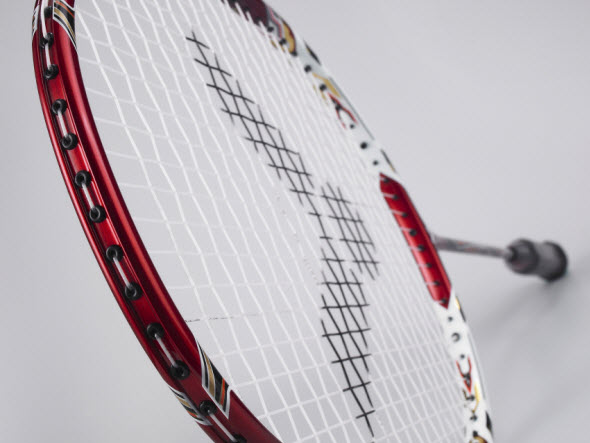 The heavier head design and shaft of medium stiffness give the TK-8000 a solid strike feeling. Singles players will choose the TK-8000 not only because it makes playing easy and saves energy, its Catapult Structure design increases the racket’s downward pressure by 9.75%, allowing powerful smashes to be delivered at key times, leaving your opponent stranded. We also believe that the attacking players in doubles pairs will like this racket (top player like men’s doubles player Ko Sung Hyun and mixed doubles player Chen Hung-lin, for example)  because, when a counterattacking shot is played, the TK-8000 can create more “surprise attack” opportunities that will confuse the opposition, and allow point after point to be won.

As can be imagined, a racket that is accepted by top professional and national team players must be re-made and adjusted numerous times before it is perfected and then wins their approval. When initial hand feeling tests were carried out the TK-8000 received high marks from players; then, when players were in training, the TK-8000 also accompanied them as long-term break in testing was carried out; then micro-adjustments were made to suit the needs of each player. Only then were players able to use the TK-8000 on court to deliver lethal smashes and grab points!

This means what VICTOR has completed is not just a formidable attack type racket; the racket is the product of tireless efforts by R&D staff and designers, the sweat of players and the VICTOR insistence on the best quality. Want to find out what a “solid strike feel” feels like? Want to deliver powerful smashes that zing off the racket? Then take the TK-8000 on court!